In the final, part 3 of the article, I’ll show you how we’re pulling from ServersCheck sensor the current temperature and relative humidity in our data center with simple SQL statement, like this:

If you recall, in Part 1 of the article I published Go “script” that could be compiled on all supported Go platforms, including Linux.
We decided that we’ll be using one of our existing Oracle11g XE instance running on Oracle Linux 6.4 (x64) to host our “vpctemp” application written in go. On this Linux server we already had the latest Go compiler installed (go 1.1.2 at the time of this writing), but we could as easily compile the vpctemp.go on some other box and then simply copy executable to our production Oracle Linux server — not worrying about some potential missing library, thanks to “go” statically compiled nature.

We copied vpctemp binary to /oracle/dba/go directory and turning on execution bit to allow vpctemp to be executed by oracle user:

And that’s it. For a DBA team getting the current temperature and humidity in a data center becomes as easy as:

** UPDATE May 2019 **
During the migration of golang vpctemp application from 11g to 18c database we got an error when querying from vpctemp external table:

In the Part 1. of the article I showed command line tool written with Google Go that reads current values from ServersCheck temperature and humidity sensor. In part 2 of the article I’ll show you how I did the same with PowerShell 3.0 script. In a way this script is more sophisticated than the golang variant. First because of the way how password for ServersCheck is handled, instead of security by obscurity I’m asking user once for a password, then storing password encrypted with a combination of his/her computer private key + user session key in a local file vpctemp-pwd.txt. Not bullet proof but nevertheless a big improvement from golang version of the script.
Second, the way I parse xml in powershell is simplified, thanks to select-xml cmdlet built in powershell 3.0.

A prerequisite for running the script is:
– PowerShell 3.0 (hence .NET 4 framework is also needed)
– execution policy must be set to RemoteSigned

You can check PowerShell version with:

and execution policy with (make sure that you run PowerShell in Admin mode!):

Final result of the script is output similar to golang version: 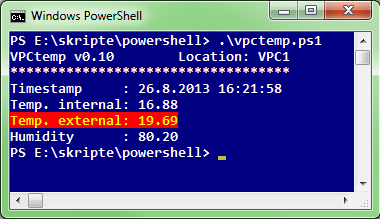 And here is the powershell script source:

In the final, part 3 of the article I’ll show you how we’re using Oracle external table “preprocessor” feature to display data center temperature and humidity with simple SQL statement.

A year ago we installed ServersCheck Temperature & Sensor Gateway that measures temperature and relative humidity in our data center. The gateway itself is a convenient (approx. 10cm long) piece of HW that you can easily mount in some free spot in a rack. 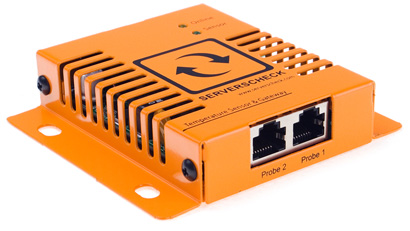 It comes with a built-in web server where you can configure various settings and read current status of device, including internal temperature (inside sensors), external temperature and in our case humidity. After you login to ServerCheck web application you can check status in the data center:

Nice, but I would prefer if I could simply skip the user interaction with a GUI; why not run s simple command line tool/script that will display temperature and humidity in our data center. The bonus feature would be to allow us to simply select ServersCheck status from SQL*Plus.
In the first part of the article I’ll show you how I did it with a simple Google Go program.

Note that we’re currently using ServersCheck gateway with Hardware version: 4.0, Firmware version 2.11. This program might or might not work for you if you’re using something else.

Since ServersCheck gateway doesn’t ship with some documented API I had to do some research and finally found that sensor status data is served from simple xml page that is accessible from h t t p=//10.10.10.10/retcurvalue.xml (replace dummy IP with the IP that you assigned to your ServersCheck gateway).

So all that we need to do is to authenticate to ServersCheck internal webserver, parse xml and display temperature and humidity….something like this:

I thought it would be a good exercise to write this with a Google Go, so here it goes:

In the part 2 I’ll show you how little code was needed to script my “vpctemp” with PowerShell 3.0.

This note is a variation of note that talks about compiling cx_Oracle module for python 3.2 (64-bit), but this time around I wanted to try out pycrypto module v2.4.1 that supports python 3. Let me say that I first tried to build pycrypto with MinGW using TLDR experimental installation package for Windows x64. Making long story short, it was a bummer (I hit several errors that I didn’t know how to resolve), I didn’t even try if 32-bit module could be compiled with MinGW. Anyway, I believe sticking with VC 2008 and bulky SDK (over 5GB of installed SW!) is inevitable, at least for me. Here’re the steps that I followed….

My target platform for the pycrypto build was Windows 7 Professional x64 (SP1) with 64-bit python 3.2.2.

It’s mandatory to build python modules with VC 2008, because this is the compiler that was used
to build python 3.2. Note that I installed default components of Visual Studio 2008 in default location.

Again, don’t be tempted to install newer Windows SDK for Windows 7 and .NET 4, it must be older SDK (released in 2009). I left all installation options at default.

After you download unzip pycrypto-2.4.1.tar.gz in some temporary directory, such as C:\Temp

Then enter the following on the command line:

After you install pycrypto, check that it works:

Here is a code snippet that I wrote recently for IronPython, correcting some registry information that I put by mistake in our image that is used for cloning client PC’s. I’m sure PowerShell script would be even shorter and cleaner, but I had to come with some working code in a hurry.

Comments Off on IronPython – working with Registry